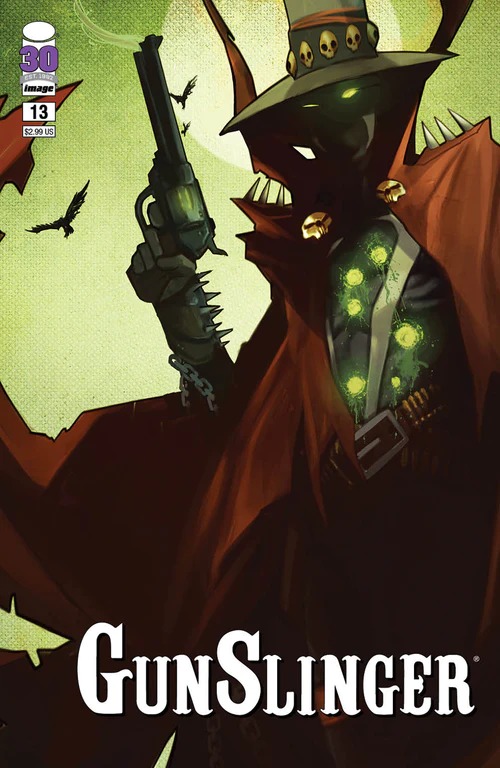 Picking up a comic book for the first time can be overwhelming and self-defeating in some circumstances.  Some comic books have canon and history that go back decades. Only a casual reader dedicated to ascending to full conversion as a comic book fan may benefit from reading Gunslinger Spawn #13.

Is Gunslinger Spawn #13 worthy of a comic book investment? I can only recommend this comic book to hardcore Todd McFarlane and Spawn Universe fans. McFarlane is a legendary artist, but not an engaging writer. Spawn fans, and now fans of the spinoff Gunslinger Spawn, are showing up for the art.

As a comic book investment, I would recommend buying this comic with a variant cover. Variant covers are inherently rare and more valuable than the standard issue. And even though Modern Age comic books are printed in high numbers, there is an intense marketplace for Todd McFarlane comic books and collectibles.

Before we get into all of that, let’s start with a brief bio of the titular character.

I mentioned casual readers in my first sentence because of this comic. If you are a casual reader, you are going to have a rough time getting into Gunslinger Spawn #13. Gunslinger Spawn is a Wild West derivative version of the fan-favorite character Spawn. And there are almost 15 years of comic book canon that you must understand to enjoy this comic.

I had to read over 30 comic books to prepare for this review. That is not a problem for me — I grew up reading comic books in the 1980s. If you are a casual reader, it may be an issue.

Unfortunately, there is no way to talk about Gunslinger Spawn’s origins without first mentioning the original character that inspired this derivative, Spawn. 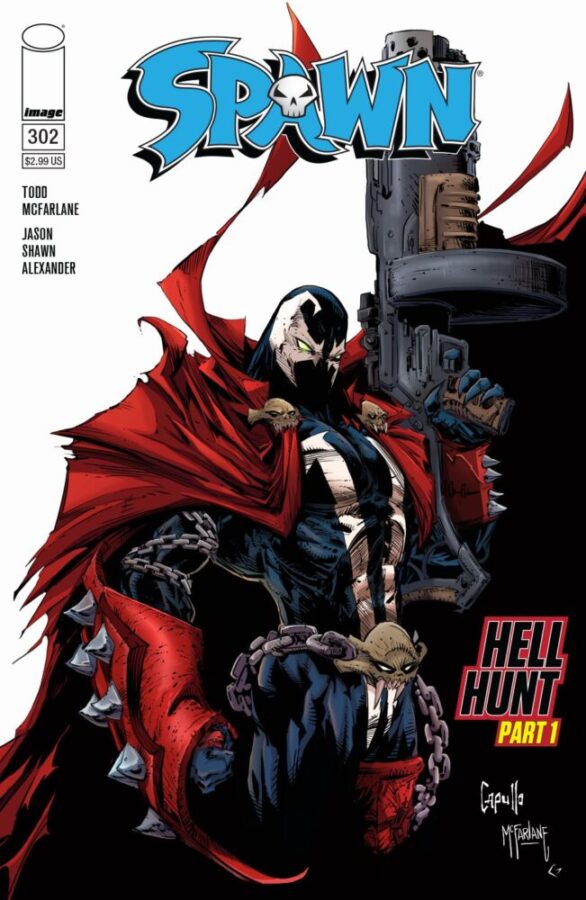 In 1992, superstar artist Todd McFarlane banded with several other artists and comic book industry professionals to launch Image Comics. Image Comics is an independent publisher. Marvel and DC are owned by corporations. Spawn is wholly owned by Todd McFarlane.

Spawn’s alter ego is a man named “Al” Simmons. Simmons is a special forces patriot who is betrayed and murdered by his colleagues. (He’s burned alive!) A demon named Malebolgia offers Simmons the chance to become a demonic antihero and return to his wife if he forfeits his soul. (The Devil has agents and proxies who collect souls on his behalf.)

It’s all a bit convoluted and over-written. But the artwork is always stellar. Spawn is the longest-running comic book published by an independent creator. The comic has published 334 issues from 1992 to the present day as of this writing.

In 2021, McFarlane decided to expand the Spawn Universe like the Marvel and DC universes. Spawn was a solo character up to this point. He wanted to create a shared universe of characters spinning off from the main Spawn title. Many of these characters are derivatives that share the original Spawn’s costume aesthetic but have their own motives.

And that is where we get to Gunslinger Spawn. 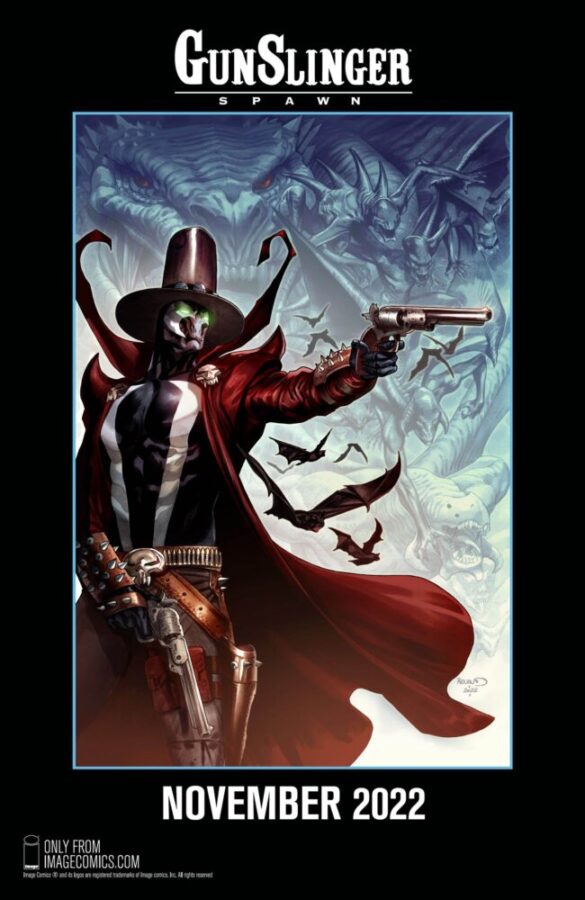 Spawn issues #174 and #175, published in 2008, tell the history of Gunslinger Spawn. The issues were written by David Hine. The story is influenced by the Civil War, the Buffalo Soldiers of the Civil War, and modern western films.

Issue #174 is dedicated to Clint Eastwood and is heavily influenced by the 1992 film Unforgiven.

In 1881, an old priest and frontiersman named Jeremy Winston lives in a town called Bane with his Native American wife and children. After Winston’s family is slaughtered, he is blamed for it and hanged.

Before Winston is hanged, he is met by an agent of Malebolgia. The agent promises Winston incredible power and a chance for revenge in exchange for his soul. Winston accepts and is transformed into Gunslinger Spawn.

Gunslinger Spawn looks like the original Spawn but wears a tall stovepipe hat. Imagine a cross between Abraham Lincoln’s hat and Slash’s hat from Guns and Roses. He also wears an overcoat and pants.

And that brings us to Gunslinger Spawn #13.

However, the story is convoluted and hard to follow if you have not done some required reading.

Gunslinger Spawn was originally a Caucasian man named Jeremy Winston who lived in the 1800s. However, Winston inhabited the body of a dead man named Javier Sanchez in Spawn #308 after being time warped into the present day. So now, he goes by the name Javi and aesthetically resembles a Latino man.

Now living in the present day, Gunslinger Spawn is hunting down enemies from the 19th century who were also shunted in the present day. These enemies wronged him in his youth and are seemingly possessed by demons. (I had a hard time keeping track of the motivations in this story.)

Gunslinger Spawn has a young sidekick named Taylor who is helping him adjust to the present day.

Gunslinger Spawn takes out some enemies in very gory and violent ways. This comic is not for the squeamish.

Meanwhile, the story also features a flashback from Gunslinger Spawn’s past. We get a new origin story that deviates from his origin in Spawn #174 back in 2008. It now tells how a very young Jeremy, who now has to be called Javier retroactively to avoid reader confusion, met the enemies who changed his life.

Brett Booth’s artwork is amazing. I have followed his work for years. Gunslinger Spawn is a very aesthetically interesting character. Booth’s work betrays the fun the artist is having drawing the character. The artist is also great with detail and depth perception.

Spawn comic books are great eye candy for fans of comic book art. And that tradition excels in Gunslinger Spawn #13.

The Not So Good

Every issue is someone’s first issue. But even then, Gunslinger Spawn’s story is meandering and convoluted.

I really recommend that you read Spawn #174 and #175. Those issues really reflect the potential of Gunslinger Spawn as a character. In those issues, you can tell the writer was highly influenced by the last act of Unforgiven and episodes of Deadwood.

But that Gunslinger Spawn, from 2008, no longer exists.

The 2008 Gunslinger Spawn avenged his family after being lynched in old age. I have no problem with 2022 being reimagined as a Latino man. But McFarlane as a writer had to give Javier a new mission and a reason for being. So, Javier is avenging the defilement of his younger sister Amy, via a wrong committed against him in his youth by 19th-century bad guys who also traveled to the present with Gunslinger Spawn? (As demons?).

McFarlane has to establish a new motivation for Gunslinger Spawn to exist in the present day since he avenged his slain family in 2008’s Spawn #175. Jeremy Winston was an old man when he debuted in Spawn #174. So now, McFarlane has to reach back further in time, when Jeremy was in his 20s, and develop enemies from the 19th century that Jeremy, now Javier, must fight in the 21st century.

It’s too convoluted for its own good. McFarlane may have been better off keeping the original Jeremy Winston persona to avoid confusion.

Gunslinger Spawn talks and acts like regular Spawn. These stories have generic conspiracies and dark forces and covert wars that are conversed about in heated arguments by our heroes. Like Spawn, Gunslinger Spawn kills some bad guys or is beaten by some bad guys until he wins by some deus ex machina story device.

There is always a dark conspiracy, Men in Black types issuing threats, bad guys being beaten or killed, new powerful villains and allies to fight, and so on. And these dark forces are always referred to as “They.” The villains are always impersonal, generic, and forgettable.

These tropes get repeated all of the time with no satisfying resolution to the story.

This is a regular Spawn trope. Since McFarlane also wrote Gunslinger Spawn #13, we get that here too.

Additionally, the reader must contend with a Latino superhero who daydreams about his 200-year-old past self in the Wild West. A past where he is drawn as a white man previously known as Jeremy but now retroactively referenced as Javier. If you are a casual reader coming into this book, you would be really confused.

Since Gunslinger Spawn is from the 19th century, he is illiterate. There are several tiresome fish-out-water gags where Taylor the sidekick helps Gunslinger Spawn adjust to the modern world which is tiresome.

I would be more interested in seeing Gunslinger Spawn exist in the 19th century. Furthermore, since he is influenced by Clint Eastwood’s William Munny’s character in Unforgiven, I wish McFarlane would imbue Gunslinger Spawn with more of an identifiable and narratively tangible frontiersman spirit, identity, and ideology.

Gunslinger Spawn is just Spawn in a tall stovepipe hat.

Verdict: Buy It or NOPE

I have to give Gunslinger Spawn #13 a NOPE recommendation.

If you are a casual reader, you will be lost reading it. I would only recommend this to diehard comic book fans for the art.

Again, I highly recommend Spawn #174 and #175 for the best iteration of Gunslinger Spawn.

Value in a marketplace is created by scarcity. Modern comic books are printed in runs as high as thousands and tens of thousands. So, under most circumstances, they should not be valuable.

If you were to buy this comic book as a collectibles investment, I would recommend buying an issue with a variant cover. Variant issues are relatively rarer than standard issues. 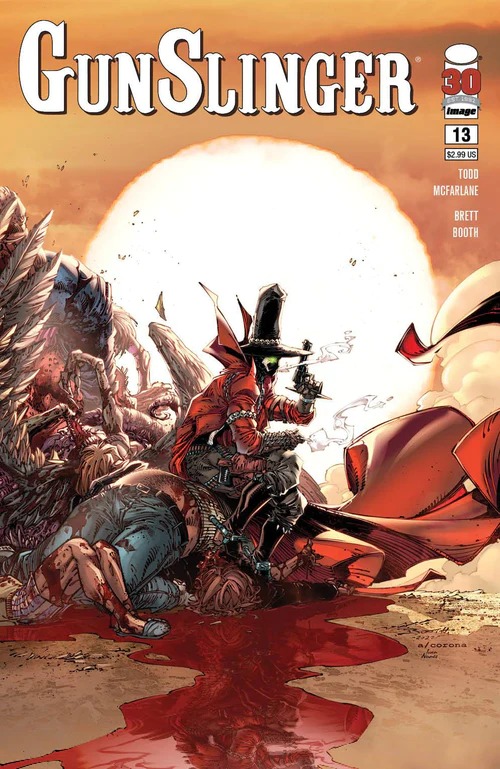 However, you would need to understand Spawn and Gunslinger Spawn comic books before investing in them. Don’t just buy it because you think it will increase in value. You need to understand the comic book collectibles marketplace and the mindset of Spawn fans to have a good chance of making a profit.

After all, you ultimately need to sell it to a Spawn fan in the future. That is not going to happen by accident or luck.

And remember that it will take years if not decades for your investment to increase in value.

For example, an issue of Spawn #174, the origin of Gunslinger Spawn, with a CGC rating of 9.8, has a value of $822 as of this writing. It was published in 2008, but Gunslinger Spawn has surged in popularity in recent years. This eBay seller is attempting to sell Spawn #174 for $1,770 right now.