I like gravitas in my comic books. There should be a narrative edge and an element of seriousness in the storylines I read that engage me. For a casual comic book reader, a perfect example of this would be Thanos’ genocidal philosophy in Avengers: Infinity War and Avengers: Endgame. However, the level of gravitas one finds in a comic book depends on the publisher, comic book, creative team, and editor. And there is not a lot of gravitas to be found in Thunderbolts #3.

You are probably aware that a live-action Thunderbolts film from the MCU is on the way. It will star Florence Pugh as Yelena Belova, the new Black Widow, Sebastian Stan as Bucky, David Harbour as Red Guardian, and other MCU stars.

It’s even been rumored that Harrison Ford will assume the role of Thunderbolt Ross after the recent death of William Hurt. The MCU has been slowly building up the Thunderbolts team since The Falcon and the Winter Solider Disney+ show.

What you may not know is that the Thunderbolts team has been active in comic books since 1996. And their initial debut had a narrative gravitas and shocking reveal that shook the comic book world of that era.

And it’s evident that this kind of narrative gravitas has long been lost in the pages of Thunderbolts #3.

Thunderbolts #3 is a breezy read. The art is serviceable. But I had to re-read it again just to write this review. The comic’s greatest sin is the bland and uninteresting characterization of Hawkeye, a fan-beloved character. Hawkeye is the leader of the Thunderbolts here, a New York City-sanctioned superhero group.

I would give it a low priority for a comic book investment. Let’s talk about it.

First Appearance of the Thunderbolts 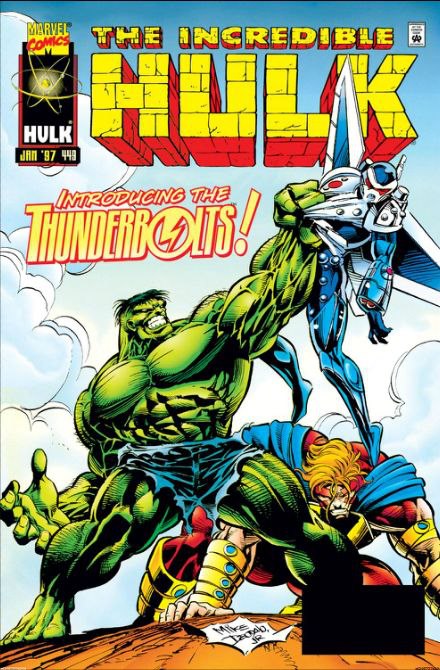 There is no required reading to get into this issue. However, there are a few comics you may want to read beforehand to understand the current status quo of Hawkeye in this issue.

Hawkeye has alienated his Avengers pals and is basically down on his luck in this issue. You can read Hawkeye: Freefall, a 6-issue limited comic book series by writer Matthew Rosenberg and artist Otto Schmidt to find out why It was published in 2020.

You may also want to read a recent Marvel storyline called Devil’s Reign, but it is not mandatory either to understand this issue.

You could also read 1997’s Thunderbolts #1 too, but not necessary. 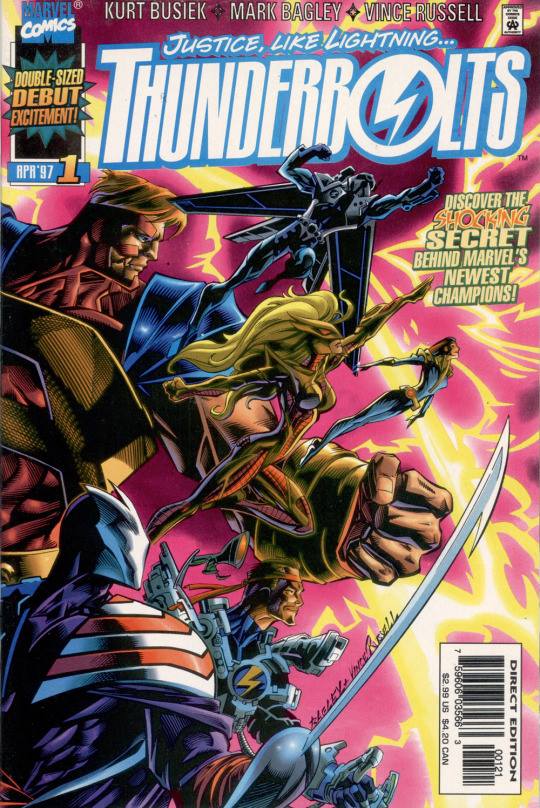 In 1997, Marvel Comics launched a new comic book called Thunderbolts, with the tagline, “Justice, Like Lightning.”

Here is a great article that goes in-depth about the comic book and era.

During this era, the Avengers were not around, so a new superhero team called the Thunderbolts was introduced to fill the vacuum. (Surprisingly, the team was not named after General Thaddeus “Thunderbolt” Ross, the MCU character originally portrayed by William Hurt.

In Thunderbolts #1, the last page offered a shocking reveal: the Thunderbolts were all supervillains in disguise! Baron Zemo and the Masters of Evil have all adopted aliases and disguises as legitimate superheroes to secretly further their evil agendas.

However, the Thunderbolts, sans Zemo, began to enjoy the public adulation that came with being heroes. And some of them became conflicted and wondered if it was even worth it being evil.

Remember that word I used before, “gravitas?”

The last page reveal in Thunderbolts #1 from 1997 shook the comic book world. It blew people’s minds and subverted what it meant to be a hero.

And that brings me back to my main point. Thunderbolts comics are not Shakespearian dramas, but the gravitas and conflicts that made them interesting in the first place are long gone.

The Thunderbolts bickered and struggled to be good people and fight their inherently bad guy natures, never mind being heroes. Without this narrative conflict, you may as well read an Avengers comic.

And the subsequent relaunches of the series lost the dramatic and narrative drive that made the Thunderbolts so interesting. Even casual readers who only watch MCU films understand the moral and motivational distinctions between the original Avengers team and the upcoming Thunderbolts team.

Avengers aren’t Thunderbolts and vice versa. Character matters and you need the right characters with muddled motivations to make a Thunderbolts comic work.

This brings us to Thunderbolts #3

Do you remember the dramatic philosophical urgency of Thanos’ quest in the MCU Avenger films? He was going to kill half of the beings in the universe to promote equality and the sharing of scant resources.

People who had never read a comic book before became enthralled with the character.

I have been reading about Thanos since the 1980s. In the comic book, Thanos wanted to kill half the universe to please Lady Death. (Thanos was simping hard.) And Lady Death was just a feminine manifestation – she was really just a skeleton in a robe.

Thanos the Simp would not have worked in an MCU film.

The problem with Thunderbolts #3 is that this is just superheroes or an Avenger B-team with the Thunderbolts’ name.

Superheroes have been outlawed in New York City. (You have to read Devil’s Reign to learn more.) The former mayor, the Kingpin, has been ousted from office. The new mayor, Luke Cage. has decided to form a government-sanctioned Thunderbolts team to serve the city.

In Thunderbolts #3, the team is still not working as a unit. Hawkeye leads an ad hoc team comprised of America Chavez, Spectrum, Persuasion, Gutsen Glory, and Power Man.

In the previous issue, they even introduced a weird alien creature called Eegro who also joined the team.

America is having problems controlling her powers. Spectrum, who can assume any form of the electromagnetic spectrum and was Captain Marvel in the 1980s, undermines Hawkeye’s authority. Gutsen Glory is a weapons specialist with an ominous secret. Persuasion, the daughter of the villainous Purple Man’s, can control minds. Power Man, who inherited the title from Luke Cage, has no confidence.

Mayor Luke Cage is a boring bureaucrat, which is no fun to see.

And Hawkeye is lost. He has no charm or confidence. He’s alienated the Avengers, misses them, and seems to be using the Thunderbolts to cope.

Writer Jim Zub is a favorite of mine. He knows how to inject wit and an adventurous spirit into his projects. But he seems to be bored here. Maybe it is an editorial decree, but the Thunderbolts are boring here. In many panels, they are just standing around.

The villains in this issue are Russian-speaking monkeys attacking Central Park. There are no gravitas or narrative stakes here. And there is no serious conflict.

The Thunderbolts are uninteresting. (I hoped Zub is being constrained by editorial decree because it is a crime to have powerhouses like America Chavez AND Spectrum in a comic and make them so boring.) The threats are uninteresting. And the last thing I want to do is to continue reading this series.

It is just Thunderbolts in name only.

Diaz’s artwork is dynamic and flows from panel to panel. If you removed the text, you could probably follow the story from page to page. And Tartaglia’s colors seem to have a watercolor influence that makes the costumes and settings vibrantly pop to the eye.

It’s a beautiful comic book to look at. Jim Zub is a master of his craft and it pains me to criticize his work. But casual readers will be lost reading this comic book. And hardcore fans will be bored or disappointed.

I usually give a comic book three issues to hook me. I read Hawkeye: Freefall and the first three issues of this series to write this review. This is supposedly a 5-issue miniseries, but I have no interest in finding out Gutsen Glory’s secret or if there was a Big Bad hiding in plain sight the whole time.

Thunderbolts #3 Verdict – (Buy It or NOPE)

I have to vote “Nope” on Thunderbolts #3. Zub seems to be going through the motions with the story and characters. There may be a big reveal in issue #5, but I am underwhelmed and feel no urgency to find out what it is.

I would not recommend Thunderbolts #3 for a comic book investment.

Someone is trying to sell Thunderbolts #3 for $3.49 USD on eBay, which is 50 cents below the cover price. This eBay seller is trying to sell it for $44 with the main draw being the new slab casing, not the comic.

I would recommend that you buy issue #1, which has a current market value of $35. This eBay seller is selling a Near Mint condition copy of this issue for $3.49 USD, 50 cents below the cover price.

If I were you, I would invest in The Incredible Hulk #449 from 1997. That issue featured the first appearance of the Thunderbolts. This eBay seller is selling an 8.0 CGC-rated copy for $134 USD.

You can find a copy of The Incredible Hulk #449 or Thunderbolts #1 from 1997 for anywhere from $100 to $300. The highly anticipated MCU Thunderbolts film is scheduled to drop in July 2024. Watch the market values of these comics and don’t be shocked if they increase in value.