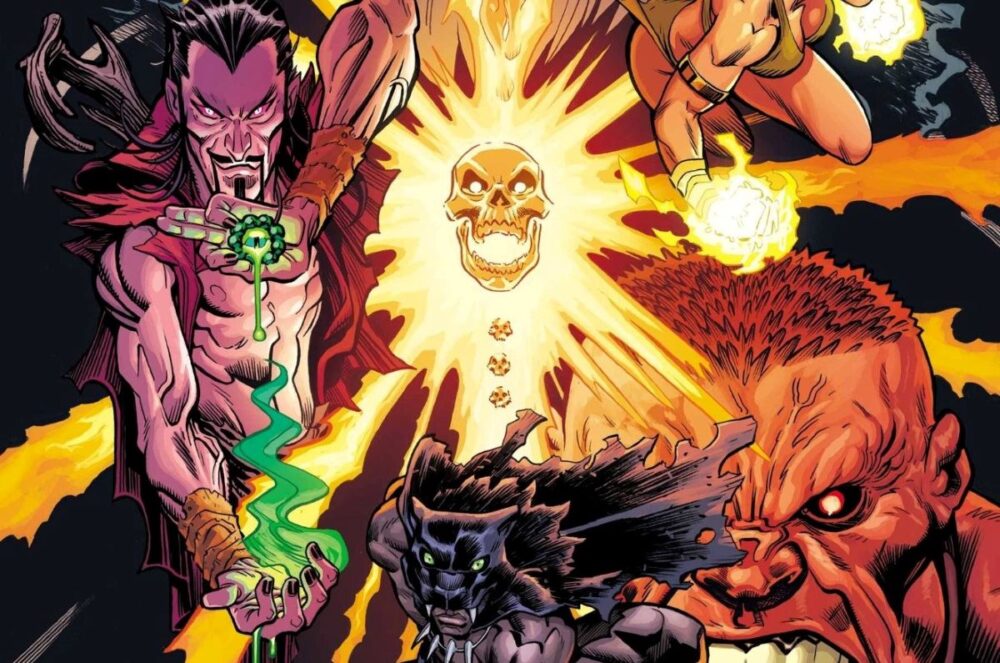 Did you see Thor: Love and Thunder? To say the film got mixed reviews would be generous. But Christian Bale’s portrayal of the god-killer Gorr was almost universally praised. Gorr first appeared in comic books in 2013 and made his MCU debut in 2022. And that is because he was created by one of the best writers in the industry, Jason Aaron. Aaron has been the main writer of the Avengers comic books since 2017. And he was responsible for some of the best Thor stories in the last decade. Many of his ideas were referenced in Thor: Love and Thunder. So, I would recommend that you read Avengers 1,000,000 B.C. #1 on Aaron’s rep alone.

The Avengers 1,000,000 B.C., also known as the Prehistoric Avengers, is the proto-Avengers that existed at the dawn of human history. The team features caveman-era variants of Dr. Strange, Black Panther, Ghost Rider, Iron Fist, and ancient (but younger) Odin in place of Thor.

If you are a casual comic book reader, I highly recommend that you keep an open mind as you read this one. And there is required reading involved to understand what is going on, otherwise, you will be lost (more on that later).

I enjoyed the comic, but I have read a lot of the required reading and know the current storylines. Unless you are unafraid to go deeper in comic book knowledge, this is more recommended for Avenger fan completists.

And unfortunately, I can’t recommend this comic book highly as a collectible investment, since it has negligible value in the collectibles market.

You could start with Marvel Legacy #1, which was also written by Aaron. But the Avengers 1,000,000 B.C. is just hinted at in a panel and in passing. They don’t really do anything in the comic.

This comic was designed to help new readers get acquainted with new Marvel storylines without feeling alienated.

Here is an official Marvel page that explains the Prehistoric Avengers.

I highly recommend Avengers #13 from 2018, also written by Aaron. That story features a flashback tale that tells the origin of the first Iron Fist from 1,000,000 B.C., a young woman named Fan Fei.

The Avengers 1,000,000 have appeared in a few issues in the main Avengers title. You don’t need to read all of them, but it would help to get an idea of how the group operates.

If you have ever seen any of the X-Men films, then you may be familiar with the mutant Jean Grey and the Phoenix Force.

The Phoenix Force is an elemental force of the universe that has the power to protect and destroy. Jean Grey was once possessed by the power of the Phoenix Force. The Phoenix granted Jean immeasurable power but drove her insane the longer she used them.

So, Jean was killed in the X-Men comic books in 1980 and stayed dead for over 30 years. The story is called “The Dark Phoenix Saga.”

The story implied that the Phoenix Force came from space and it was the first time inhabiting a human host.

Avengers 1,000,000 B.C. confirms that the Phoenix Force is a celestial entity, but that it visited Earth in ancient times.

Lady Phoenix, also known as Firehair, assembled the Avengers 1,000,000 B.C. in prehistoric times to battle threats that could destroy the Earth.

The team dynamics of the group need more fleshing out. There is nothing that sets the Prehistoric Avengers apart aside from the fact they live in prehistoric times.

And that is the main problem with Avengers 1,000,000 B.C., even though it is an interesting read.

I hate criticizing my heroes, so let me start with the positives.

The thrust of the story concerns revealing the ancient events surrounding the birth of Thor.

Aaron’s storytelling skills excel when it comes to worldbuilding, plot, and characterization. I highly recommend you read his Ghost Rider and Thor comics from the 2010s, as well as his independent, creator-owned content.

Odin is depicted as an arrogant, conquering god with serious dating troubles. He fancies Lady Phoenix, who isn’t interested. Lady Phoenix then acts as a wing woman to another female to get Odin laid.

The struggles of keeping the team together after stressful battles, as well as Odin’s hound dog ways, threaten to tear the team apart. And in the midst of all this drama, Thor Odinson is born.

The story has a grand design. You can tell Aaron has a lot more story to tell. I would wager that this was a 6-issue or 12-issue story that got truncated into a one-shot. There are too many things happening in this story to be appreciably resolved in 32 pages.

The art and coloring are top-notch, so there are no complaints there.

The biggest problem with this comic is that it features so many intriguing characters with so much story potential who have no room to be explored. The main characters in this comic are Odin and Lady Phoenix. Calling the rest of the characters supporting characters is overly generous – they barely factor into the events of the story.

It is not a bad read. It is just not as satisfying as it could be. The aesthetics of this team demand a grander story involving all of the characters.

Why does this team exist if we can only get one feature comic book featuring them but then only just focuses on two of them?

Verdict – Buy It or NOPE

I would only recommend this comic book to hardcore Avengers fans. Unless you have done the required reading, casual readers will be lost.

Comic book characters and ideas created by Jason Aaron in 2013 appeared in 2022’s Thor: Love and Thunder. I wouldn’t be shocked if there is a short cameo scene of the Avengers 1,000,000 B.C. appearing in a future Avengers film, especially since the time-traveling villain Kang is the new Big Bad.

I would recommend that you buy this comic as a collectibles investment. It has no appreciable market value now, but if these characters get popular in the future, then you got in on the ground floor. Buy a variant cover edition, which is rarer.

This eBay seller is trying to sell a variant cover of this comic book for $150.